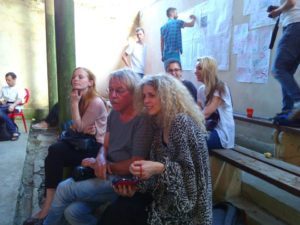 There is a global debate on reasons why people are losing interest to participative democracy and why populist parties are increasing their consensus. Western typical democracies actions seem to be ineffective to deal with the populations’ need to be part of decisional processes in an ever growing nationalist way. Most of the inefficacy is connected to the incisive communication and, consequently, to political and scientific disclosure to wider people issues. Politics is very interested in the missing link between real data and what the most people understand.

In this context, the project ARTIVISM-EARTHvism works on the empowerment of critical thinking using scientific methodology together with an artistic approach in a rural model area environment, to let people be an active citizen and to better participate in decisional processes typical of democracies.

ARTIVISM seeks to bring art into association with such core issues of society. For this purpose, the small towns of Cavriglia in Tuscany near Florence, Chalki on the Greek island of Naxos and Brelingen in the Hannover region are chosen as rural model areas in which an intensive interaction between local population and the ARTivism team is to be achieved by artistic and scientific means. These regions have emerged through their social initiatives and because of the exposure to typical Earth’s surface dynamics (e.g. natural hazards, adaptation, resilience), thus they are particularly suited to improve democratic participatory models with the involvement of international artists and landscape scientists. The success of the activities is based on the professional approach of the participating institutions, which are: higher universities, schools, cultural facilities and organizations working on an international environment in cooperation with local people who work in the educational, cultural and scientific context and have a direct link with the youth.
ARTIVISM includes two weeks workshops for artists, landscape scientists and locals in each one of the three partner countries. Workshops, whose aim is the analysis of a new successful social-artistic and scientifically substantiated communication strategy. In the process, difficult, critical issues of the society of the three model areas that ARTivism studies will be taken up and a playful-creative, aesthetically-entertaining, built upon the argumentative debate model and scientifically based but easily understandable to all approach will be proposed. Everyday culture and life experience are fundamental to the artistic and scientific process.
In the tension between everyday reality and vision, ARTIVISM overcomes those boundaries to discover and test new possibilities for action. The goal is personal, social and political changes and creative ways of dealing with conflicts as well as social challenges and change processes. The potential of the different arts and earth sciences flows into participatory work in rural model areas. This is where the public scientific explanation of the participating universities begins. This scientific explanation is based on the research and tight engagement with the different environments of the model areas: it’s a fieldwork enhanced by the thorough dialogue with the subject experts. In doing so, a dynamic perspective of the processes of landscape, soils, shapes, light, winds and the relevance of climate change is incorporated into the artistic and social work of this project: a new and deeper sense of aesthetics and beauty gives us the ability for a different and more focused approach to the world we’re in, fostering a new communication paradigm in which people is more responsive to what’s is happening around. Within ARTIVISM, artists will benefit from landscape scientists’ perspective: to better represent nature, artists need to better understand its processes and their mechanisms, which are commonly unknown or neglected by the general public. The respect towards nature and the understanding that it creates acts as a source of inspiration to increase the responsibility of the artist–citizen to the society in general.

In all of the three meetings different artistic-scientific workshops will take place. Among artistic workshops, we planned: participation theatre; music and dance; poetry; sculpturing and painting; performances of all previous subjects. Artists will start to work with the theme „Aesthetics of nature: light, sounds and forms of the landscape“ and they will refer to the inhabitants of the region. Among landscape science workshops, we planned: investigation over dynamic aspects of the landscape; help techniques of the 3-/4-dimensional landscape visualization by visual scientific computing (ViSC); risk analysis from pure environmental observation; adaptation and resilience, namely how we adapt ourselves by picking up old structures of the landscape such as dams, watercourses, walls and make them available (biomass, wind energy, climate effects should be seen from the point of view of solutions, not risks and crises. It’s all about finding practical solutions, developing adaptation strategies together, not top down). Universities scientists will represent the landscape of the model areas in an unbiassed way and they’ll provide the artists with these impressions helping them with the comprehension of landscape specifities and aesthetics, and artists will help scientist to detect new ways to forward scientific matters to general public, in a strict cooperation between them. The key question for universities is how the locals can be reached.
All workshops will be structured with the debate strategy that will also permeate all ARTIVISM steps. The debate strategy is fundamental for our purpose because it’s the perfect bond between logical and creative processes and it’s the best way to explain different topics over a structured argument. We planned also a specific workshop to enhanced debate strategy with the expertise of both artists and scientists.
ARTIVISM wants to activate „everyday art“ of locals, their cultural heritage and their memory culture for the artistic work to empower soft skills that are the base for critical thinking and better understanding over scientific matters disclosure. This will create a methodological toolbox that will be transferred to all the three model areas. ARTIVISM is created as a long-term project and its workshops are intended both for staff and for locals.
Our aim is to help young people finding ways of actively participating in society so that they can inspire the local populations in the model areas to do the same. However, the intention is to go further: we want to promote exchange and understanding of ideas and actions among young people to foster a transnational active community. To do that people have to better understand and to be aware of the surrounding, scientifically based, reality, to distinguish it from it’s pure speculation such as fake news.
The society Artivism is seeking to build is based on strong bonds between humans, but also between man and Nature, intended here as the complex system of forces and processes governing the Earth surface and acting on the territory men live in. Broadly speaking, men perceive nature and landscape as static shapes, neglecting that the habitat where they live is governed by complex physical laws and forces that balance each other into a dynamic equilibrium. Neglecting the dynamic Earth surface processes (both the slow ones – e.g. soil erosion – and the impulsive ones – e.g. floods and landslides) brings to a high toll of lives and damages in the society. Within Artivism, artists could help scientists to find new approaches to filling this gap, and that would be essential for landscape scientists to let their work become really effective and to positively impact society. Conversely, scientists will help the other partners to get into the abovementioned dynamic perspective: that could be of special interest for artists and for activists to better understand, express and respect the nature and the territory we live in, and this enriched knowledge could be used to foster new ways of incisive communication.
The results and documentation of the workshops will be shown in all partner countries too and further developed by the participating cultural institutions. This trilateral Greek-Italian-German cultural cooperation should permanently reflect in a center for Art and Politics in Naxos (Sculpture Park), in a Rural Action Center for Communication and Scientific Disclosure in the region of Florence and in the Kiosk of Democracy/PERIPTERO¹ as well as an AGORA and open creative pathways in the landscape in the region of Hanover. Furthermore ARTIVISM will spread from these centers the political-artistic-communicative actions in European-wide campaigns, and all the universities, not only earth departments ones, could involve them in their academic teaching and publication.
ARTIVISM main objectives are the activation of the communities for the intended centers for culture, politics and science, the formation of citizens‘ initiatives, the development of a better understanding of nature to promote the idea of environment conservation and proposals for an effective dissemination of Earth sciences (with particular emphasis on risks related to interaction between natural Earth surface dynamics and human activities, settlements, tourism and raw materials extraction, and related resilience/adaptation strategies) among citizens by means of texts, theatre performances, graphic arts, structuring of classes and new digital tools, in political-artistic campaigning consciously made.

ARTIVISM, from the beginning, is also open as a European pilot project for artists from other countries. The results will be transferred to the Democracy in Motion Youth Congresses, the Forum Democracy in Motion and the international youth film festival Up-and-Coming in Hanover and they will be made available to a wide audience in Europe. All nine partners are equally involved. In addition, universities and high schools in the model regions will be in integrated in such programme.
We want to lay the groundwork for expanding our democratic area of actions. It is about freedom of expression, public participation and the need to influence change – an intervention in public life. The model areas are intended as a laboratory and as a scope with the conviction that each person is an indispensable enrichment for an open, diverse society through their own experience and expertise. Everyone has the right to be different. As Joseph Beuys stated, everyone has to develop their own abilities for themselves and for others and thus to make their own lives responsible.
We are all challenged, because if we do not want, in the society of the future, to live in ever stricter, separate quarters among our own, but in an open society capable of dialogue beyond the boundaries of social and religious milieus, then we should provide space for this communication.

ARTIVISM is to have a lasting social impact on the model areas in the regions of Naxos, Florence and Hanover and beyond.
A social space, an Agorá, is created permanently
The democratic needs of citizens are included in the artistic and scientific work. They are analyzed and documented visually, cinematically, with ViSC, and literarily in special publications
The collaboration between Art and Science represents what is required to express clearly the political needs
The artistic actions take up the core aspects of democracy: participation, self-thinking, discussion, discourse, debate, meetings, seeking consensus, individual and social autonomy.