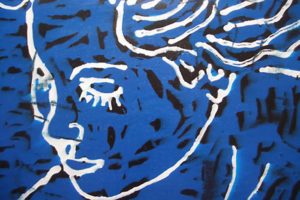 Sascha Windolph is a sculptor and painter in Hanover. As an artist he also worked in Leipzig. He has been a member of PROTERRA since it’s founding and closely associated with the activities of the association on Naxos. There he has i. a. participated in work camps to build dams against soil erosion and set up a nursery with Manolis Glezos. On Naxos also Sascha’s first art exhibition took place in T’Aperathou. In the „Kiosk of Democracy“ he works together with Greek artists who artistically address the social crisis of the country.

In the middle of a period of rebellion for dignity, the question of the social and ecological balance, the individual’s claim to co-creation and recognition, the parallel to the upheavals of 1989/1990 and the search for a just and solidary life became the Kiosk of Democracy started in Hanover in the summer of 2012. For the time being, the kiosk will mainly be held virtually on the kiosk internet platform. The kiosk had its first improvised appearance in a tent during the congress „Democracy in Motion – Youth in New Democratic Movements“ in Hanover on 18 August 2012 on the Ballhofplatz. Most recently, the Kiosk of Democracy participated in Documenta 2017. The contributions of the Kiosk consist mainly of pictorial representations that have a documentary and artistic character and are dedicated to the questions of freedom, dignity, justice, solidarity, ecology, ethics and aesthetics.